Alex's thoughts and debrief from 10/29 lab

I led the last lab in our session exploring ensemble work. There was low attendance this evening, but the smaller group potentially allowed us to deepen further into our dancing.

We began with a warm up dance to music. We warmed into our bodies, the space, and did some light grazing while moving  to the first few songs on Andrew Bird's album Useless Creatures. The album is his only purely instrumental album I know of and it seemed to be well received by the group and provided us with a luscious container for our collective warm up.

After our warm up dance, we split up into two groups and spent the next 20 minutes in our first long engagement dance with others. Cyrus, Louie and I danced in a trio and Mike and Michal danced a duet. I wanted to use these dances as a way to warm into listening, giving and receiving weight and deepening our connections with others while dancing before jumping right into ensemble work with more people and information. These dances were a good investment for the work we did later. We all seemed more prepared to share weight and find the juicy places of interdependence in the dance rather than just adding information on top of information without the genuine connection and listening that can happen when there is lots going on.

After these first two dances, we paused to harvest before moving on to ensemble work. I brought paper and pastels and we spent a few minutes working on our own images before sharing with the group. I noticed that everyone seemed to share an equal amount and everyone spoke about their image during harvest. The time to reflect before speaking and the use of a different form of communication to share our experiences, seems to be helpful in terms of balancing out who shares and how much each person shares. When we go right into speaking during our harvest, it can sometimes feel a bit unbalanced. I am interested in exploring a variety of ways to harvest.

Louise's image described our warm up dance speaking to the perfect amounts of space in between all of us during the dance and the group momentum. His image had lots curved lines with arrows, crescent shapes, stars, suns and flowers on the ends of each line. His image was rhythmic and well balanced with a mostly even amount of negative space surrounding each line/pathway. The lines were all orange and some of the shapes on the end were surrounded by black dots.

Cyrus drew a long, curly, line that seemed to map the path we traveled in our dance. The line traveled around the page and paused in these little enclosed "eddy's" that were filled with more specific, detailed activity which looked geometric. The image also had these light, wispy knotted lines that surrounded the thicker path.

I unintentionally chose the same colors as appeared in our trio's clothing (red and blue). I focused on a series of diagonal, linear marks and also these hook-like marks that all curled and folded into each other which represented movements that stood out to me in my dance with Louise and Cyrus.

Michal indulged in a lovely drawing that she said had nothing to do with her dance. It was colorful with lots of circular shapes that she said were influenced by Denis' painting in the room.

Mike used his image to express his frustration with not feeling totally grounded in his body. Feeling tired and run down and not well connected, his images spelled out FUCK OKIE. He said he was playing around with expressing his feelings of frustration making the picture caotic, buzzy, with odd faces and scratchy lines. He also was practicing accepting where he was at even though it may not have been his desired state which I believe influenced him to write OKIE.

My initial idea was to have everyone find one small moment, word or idea from their images to use as a "seed" for our ensemble dances. I remember Scott mentioning the idea of one person "seeding" the dance with their movement, exiting, then everyone entering the dance together with that particular seed in mind.

But then after sharing our images, Louie suggested instead of using our bodies to "seed" our dances, we could use one person's image as the "seed" or source material for the ensemble. We all agreed to go with that and danced everyone's image. It produced incredibly interesting, connected dances that all had very unique specific flavors that were clearly connected to the images. There was always at least one person witnessing and everyone agreed each dance was superb. They all just felt "on" somehow.

Cyrus mentioned the dances having really specific subtleties.
Someone said the dances seemed to unfold and didn't appear forced.
Mike was interested in this idea of translation. A dance into and image back into a dance.
Michal said it felt like people were dancing inside the image.
We were also interested in engaging with different form of communication than verbal and how that may have opened us up to more creativity?
I wondered how important it was that those images came from our collective experiences rather than using just any images? I think there is something to the re-using of material we created together. Building upon a language that's being established.

This work with source material or "seed" seems juicy to me I would be interested in exploring all sorts of different sources. It could be fun to use objects, a piece of music we all listen to in stillness, or a smell. 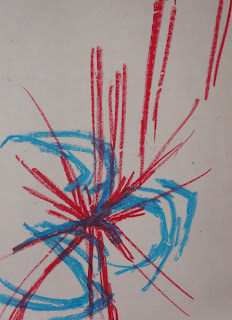 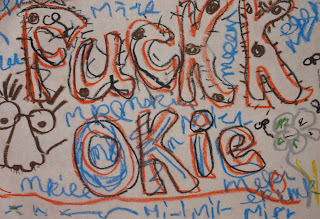 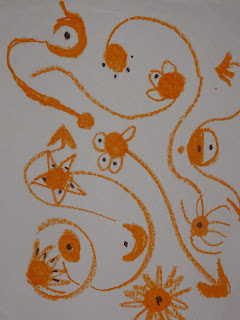